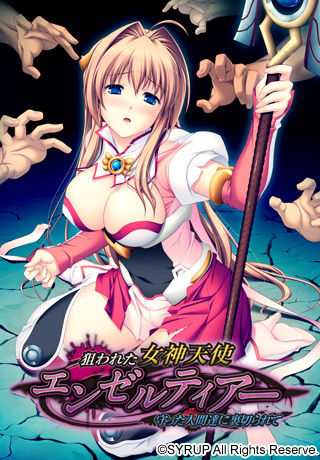 After a certain incident, Yuuri was guided by Suzune, the goddess angel Holy Rouge to become “Angeltear”, and fight against the demons. Yuuri keeps fighting bravely, to protect the peace of the human world, her friends and her loved ones.

However the demons saw through her personality, and prepared an special trap for her. After seing how Angeltear uses up all her energy, they purposely start to contaminate males. The demons threaten her by saying that the only way to save these men is by sexually satisfying them.

But that’s not the only problem, there are more people apart of the demons aiming for Angeltear. Men that she rescued from the demon’s hands, men that go after her with lust when she uses up her energy, men that lie about being attacked by demons to get some sexual services and people that threaten her with revealing her secret identity unless she services them.

Not only they go for her when she’s transformed, these people that she saved also go after her body when she isn’t transformed…